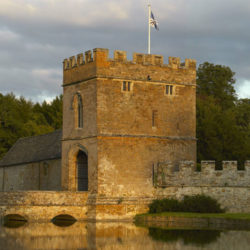 Broughton Castle is a moated and fortified manor house near Banbury in North Oxfordshire and the family home of the 21st Lord and Lady Saye & Sele, whose family name is Fiennes. The ownership of the Castle has remained in the same family since 1447.

The core of the house was built in 1306 and the gatehouse in the early fifteenth century, but most of what you see today dates from the 1550’s. It was a centre of opposition to Charles I and was besieged and damaged after the Battle of Edgehill in 1642.